In this article, I’m going to use MidJourney. Previous chapters used DALL-E. Let me know what you think twitter.com/lmoroney

We should always reach for the sky.

From the very beginning of history, our ancestors were looking up and wondering what was beyond their reach. The stars were calling them. They weaved stories of gods and angels, but behind them all was the intense desire to be out there. A desire born of an instinct for survival. 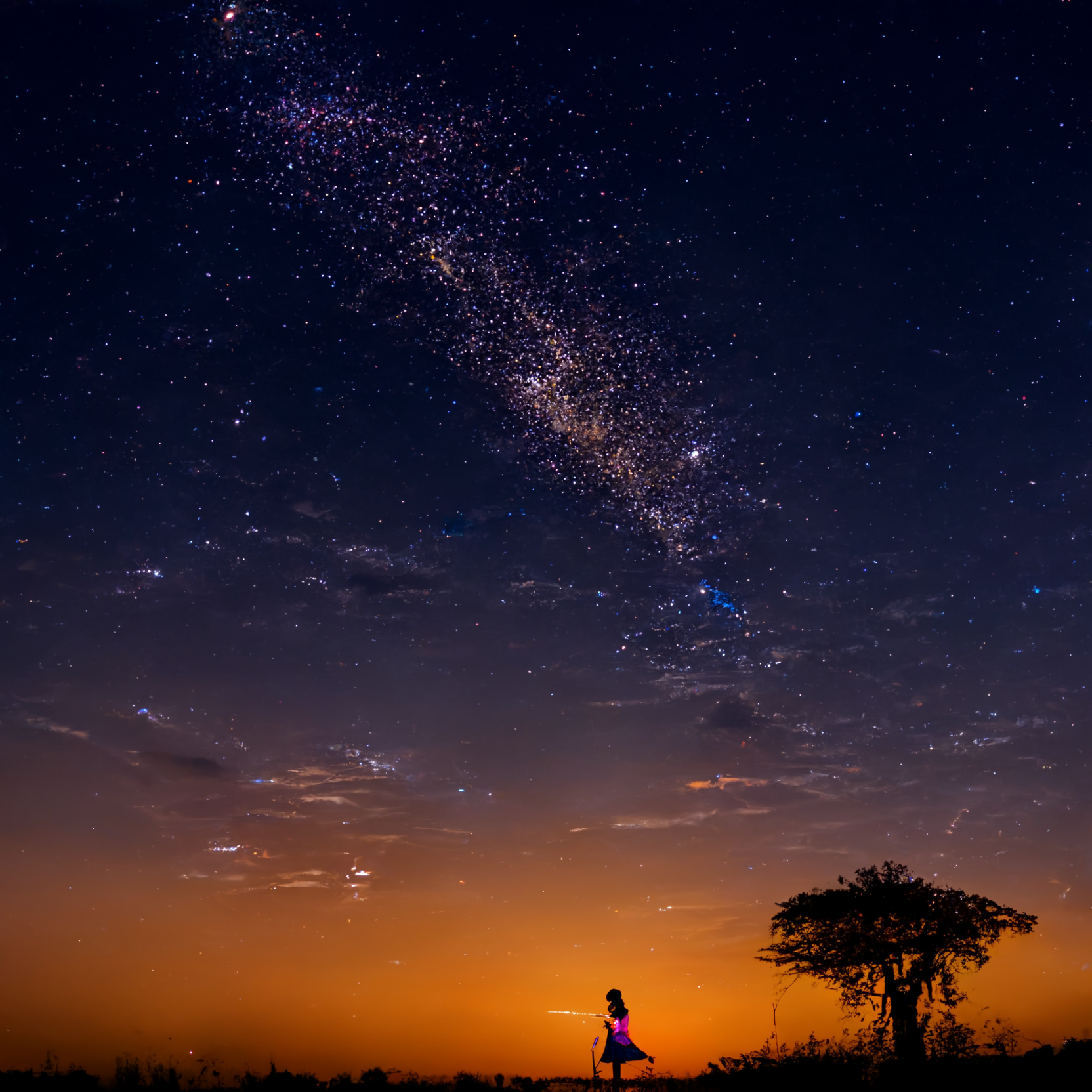 It’s something we’ve forgotten as we’ve become civilized. We’ve become comfortable in our homes, our cities and our countries. We’ve defeated nature and haven’t had the same worries that they had. But we lost something in that complacency, I fear. And now, as our world gets overcrowded, as our environment collapses under us, we need to rediscover it. We need to look up, and not worry about tripping as we race towards a new destiny. We will be those gods and angels if we want to. And you can be one of them, if you just keep trying, and never give up… 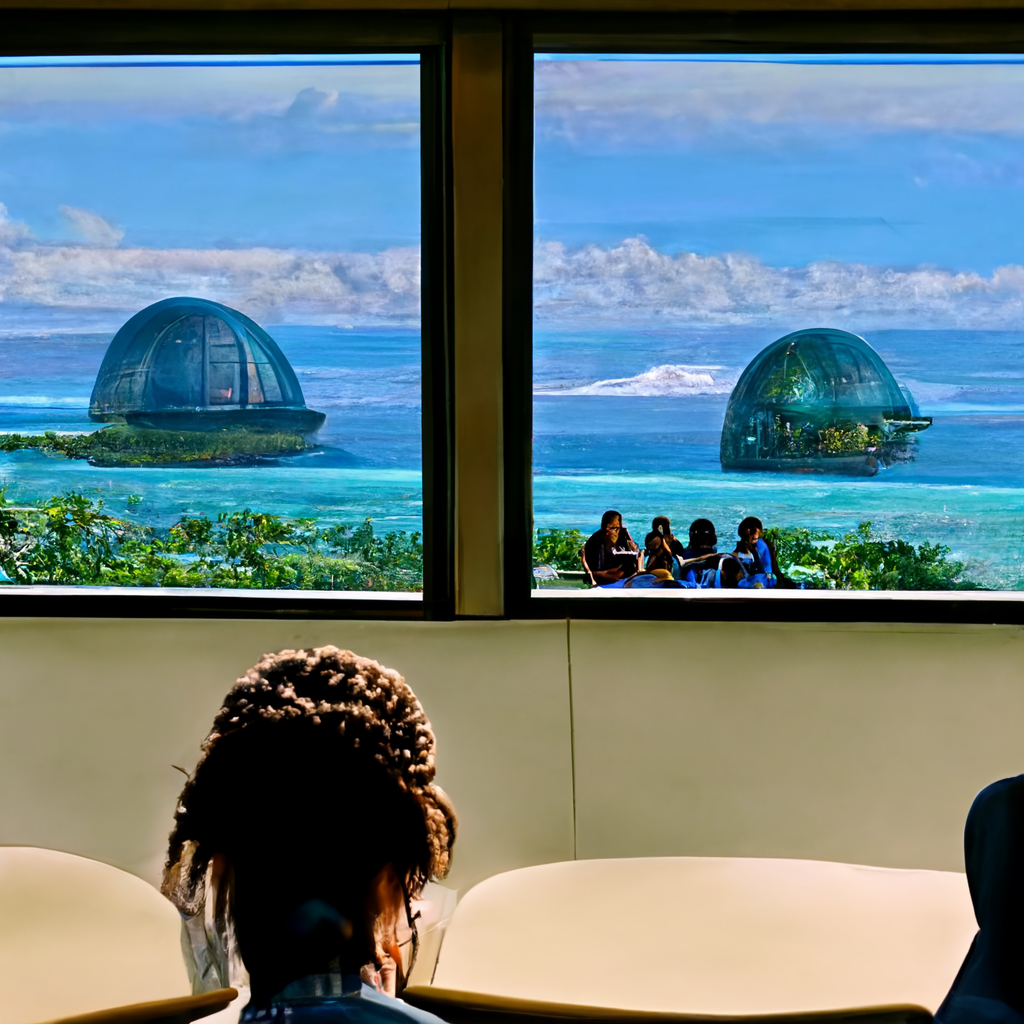 THE SPACE ELEVATOR. Its relatively simple name belied the sheer scale of it. Craning her neck, Aisha looked up as it disappeared impossibly into the deep blue sky. The ‘shuttle’ was a box-like structure that could easily pass for another building, but for the rocket boosters placed on its corners. These boosters would provide the initial ‘launch’ to get the craft moving out of its gravitational inertia. After that, the rotation of the Earth would take over and drive the shuttle up the cable into orbit. 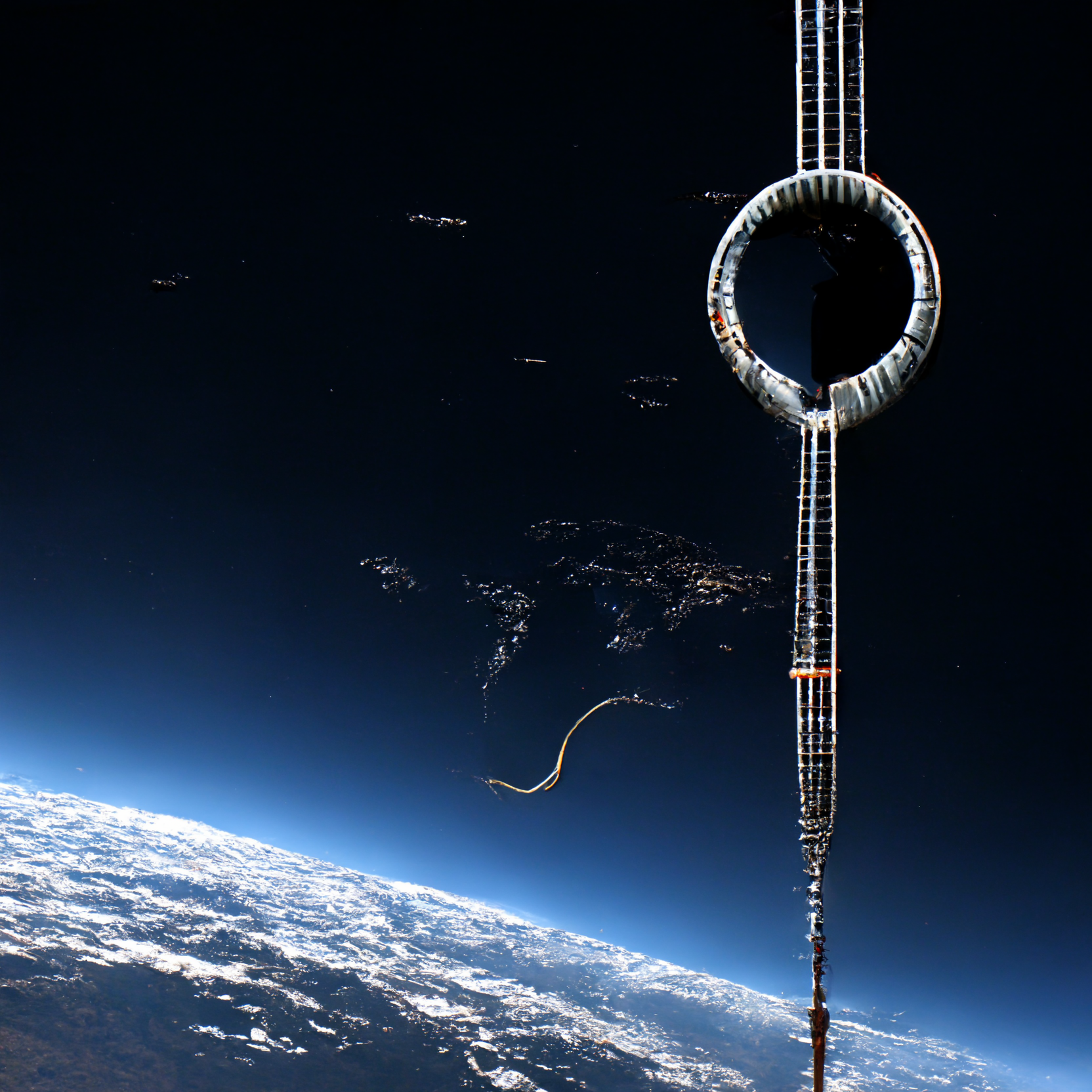 She was so glad for last night’s dinner with Mother. Beforehand, it had felt like there was a tension building between them. Mother’s basking in her status had gotten under Aisha’s skin, and she had been worried that she might blow up at her before leaving. She was worried that she might end up regretting it, but there was only so long she could bite her tongue. 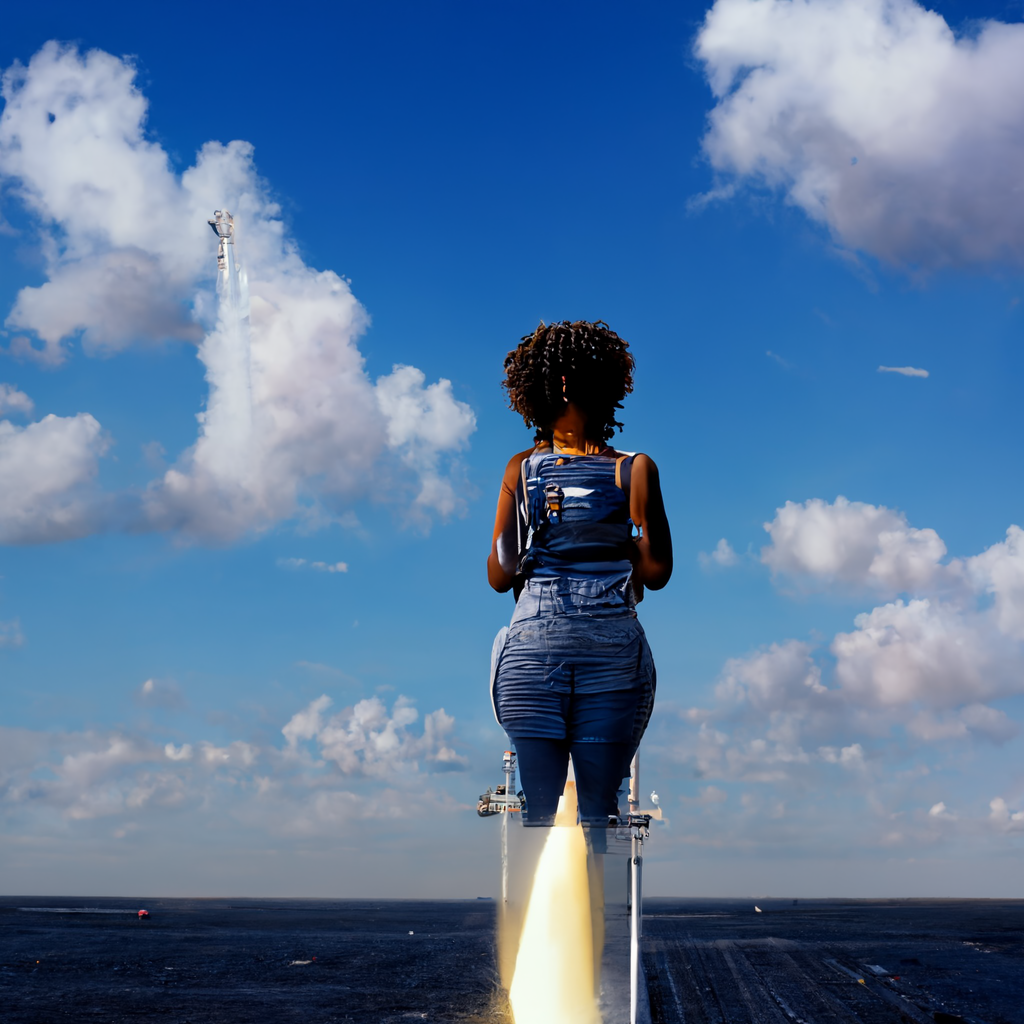 She almost thanked the reporter for his rude question. It had brought them closer together. She felt a pang of pride again at Mother’s words that she had done exactly what Father would have done.

Of course, the same reporter had wrestled his way to the front of the audience, and was barking out questions to the cadets as they boarded the shuttle. She was happy she knew where he was, so she could actively ignore him as she passed.

She gave Mother one final hug, and turned and walked along the long ramp up to the shuttle. With every step away from her, Aisha felt more and more alone. As the entrance loomed toward her, she felt the urge to turn and run back to Mother’s welcoming arms. Mother would hold her and protect her, and to heck with anyone who would criticize her for not going through with it. 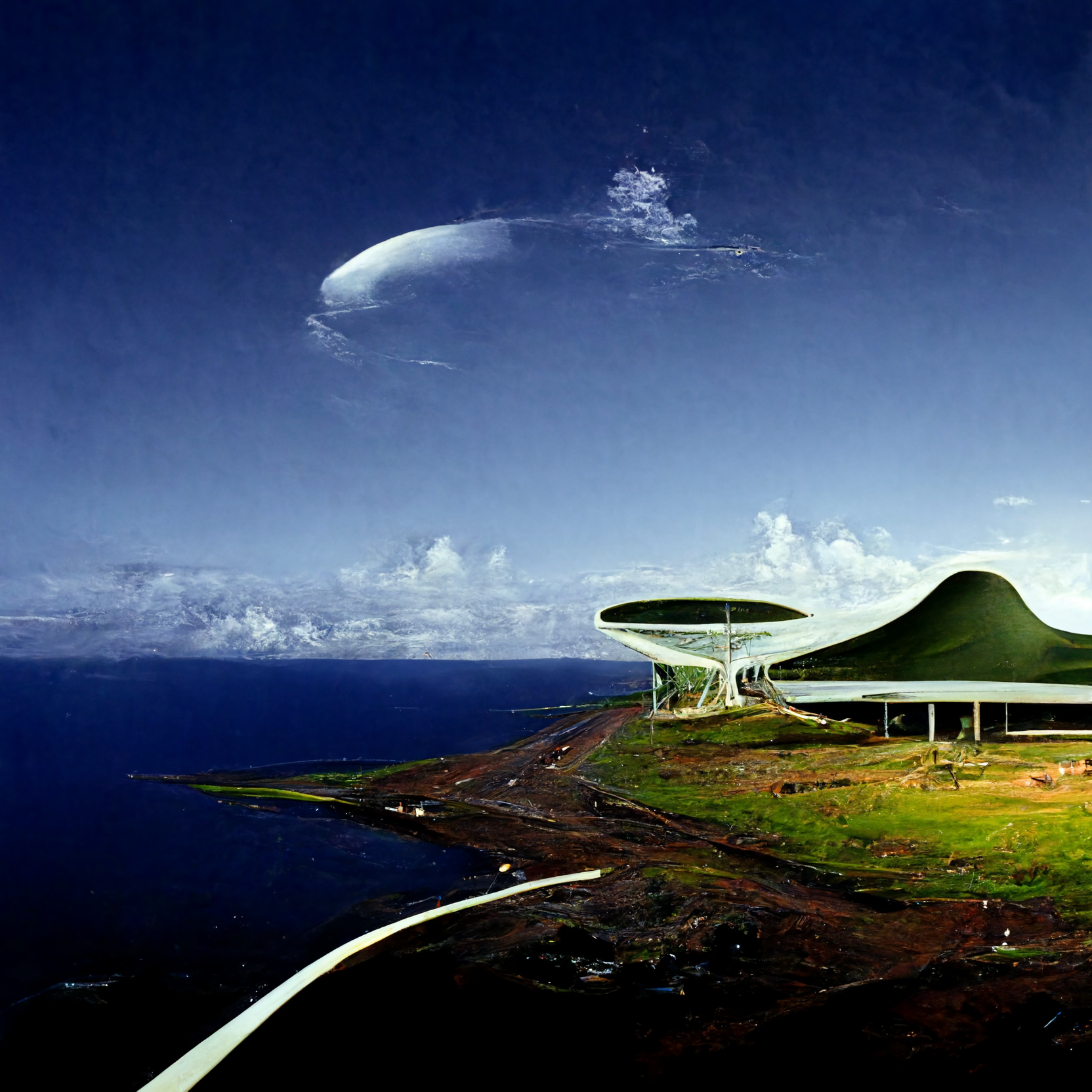 At the top of the ramp, she turned for one more look back at the Earth. She caught Mother’s eye as she waved frantically, blowing kisses and smiling. “That’s my little girl!”

She raised her hand to wave, hearing cameras popping, and returned the smile before turning to enter the shuttle. Her feet suddenly felt heavy.

She was really going through with this.

She was really leaving home and going into space.

Each step seemed to be a chore, doubt and indecision weighing on her more heavily than gravity ever could.

Step-by-step she continued forward. The entrance lobby curved away from the door, and in a few moments, the daylight was lost. Words she had learned from history came back to her. Alea iacta est. She smiled, thinking that her Classics teacher would be proud of her. The die is cast. 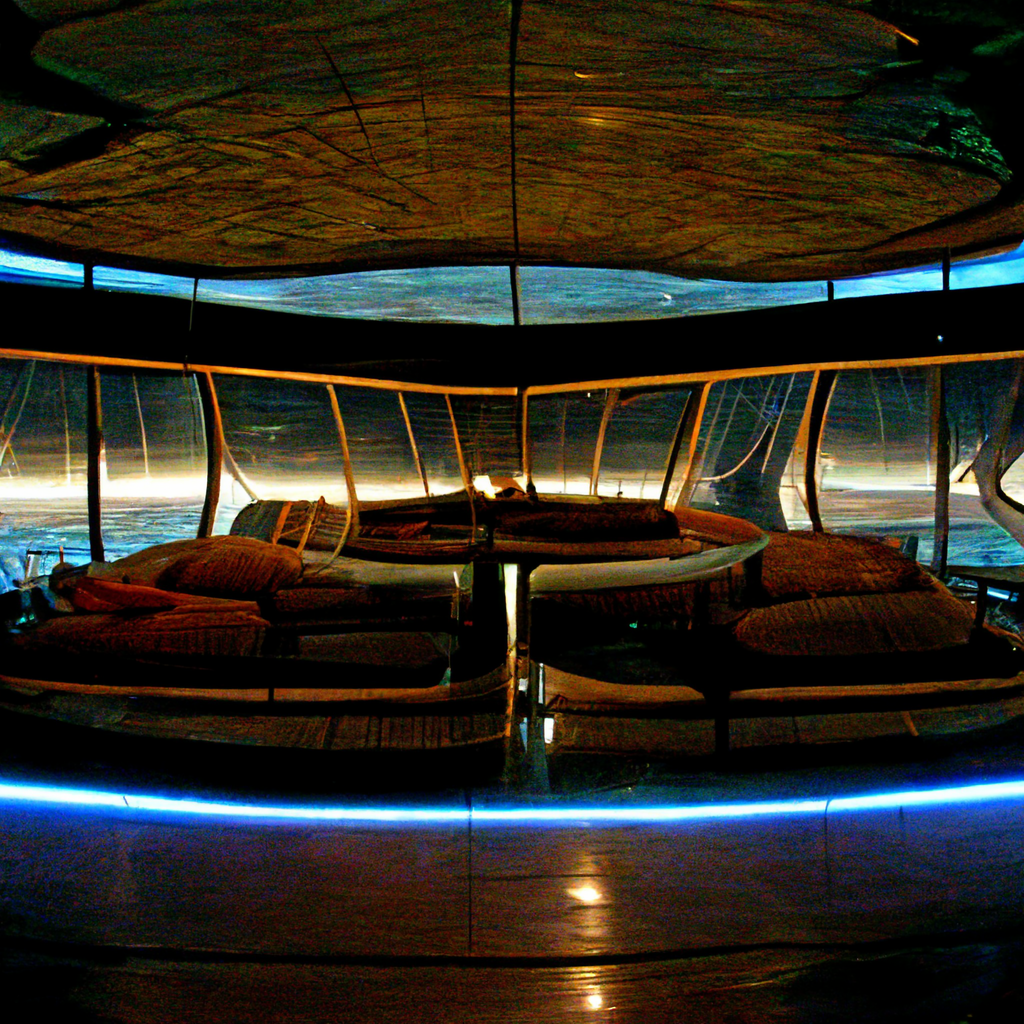 The interior of the shuttle was clearly designed to impress and soothe its occupants. Instead of the functional ships of yesteryear, it was all polished chrome and intricately-designed surfaces. In the days of rocket travel to the stars, every ounce of payload had to be carefully measured, with no room for luxury, as propelling something into orbit required enormous amounts of energy.

The Space Elevator changed all that, so designers of spacecraft were free to allow their occupants to be comfortable with traveling into space. This was also an important factor as many more people would leave the surface of the Earth – and a good, comfortable experience made it more tolerable, and thus less training was necessary. Indeed, Aisha had little more training than a couple of video tutorials explaining how to deal with weightlessness, and what to eat or not to eat prior to boarding. It was also good advice to use the bathroom before getting on the ship, for while facilities were available, using them in weightless conditions wasn’t optimal.

She climbed stairs to the observation deck where she would spend most of the journey. The deck was a wide circle with multi story windows, and acceleration couches arranged facing outwards. 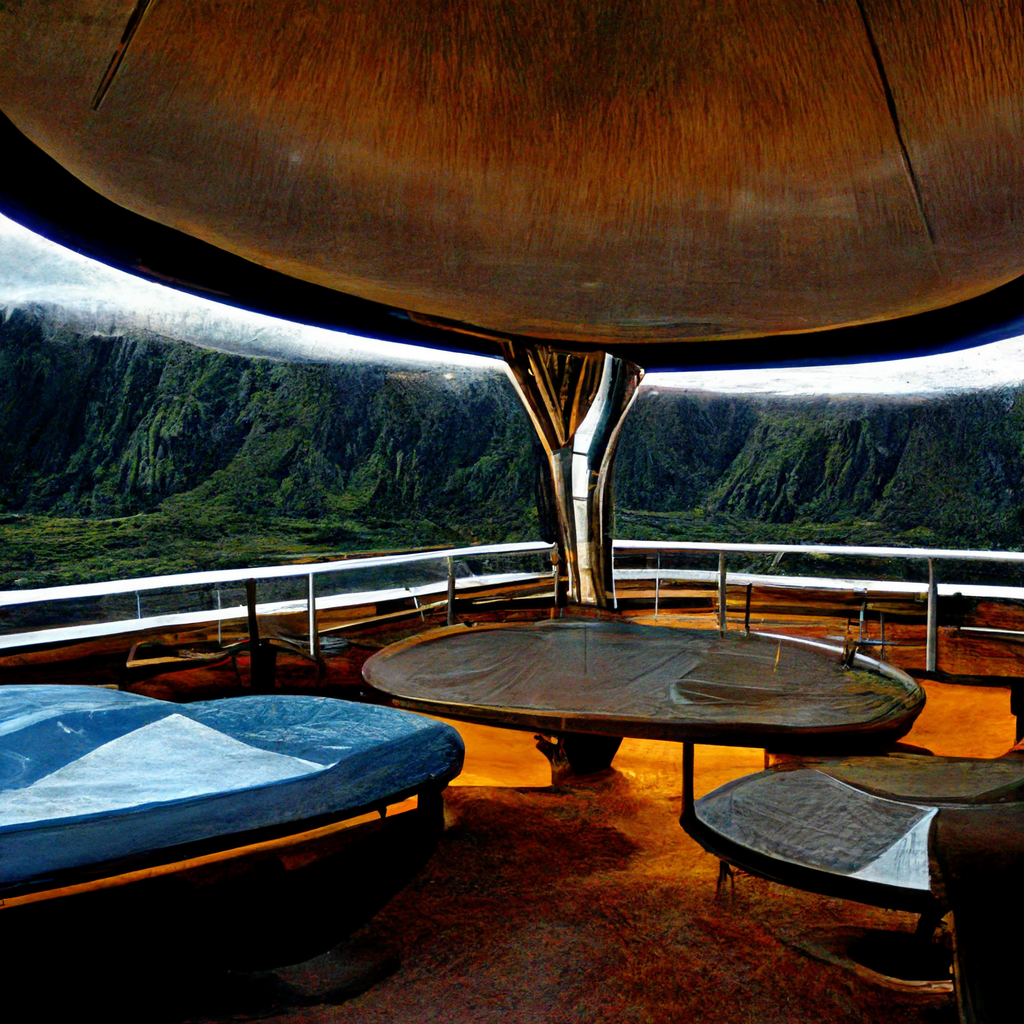 “As we rise up the cable, the shuttle will spin slowly,” she had remembered the tutorial video telling her. “So pick any seat, and you’ll still be able to see everything.” 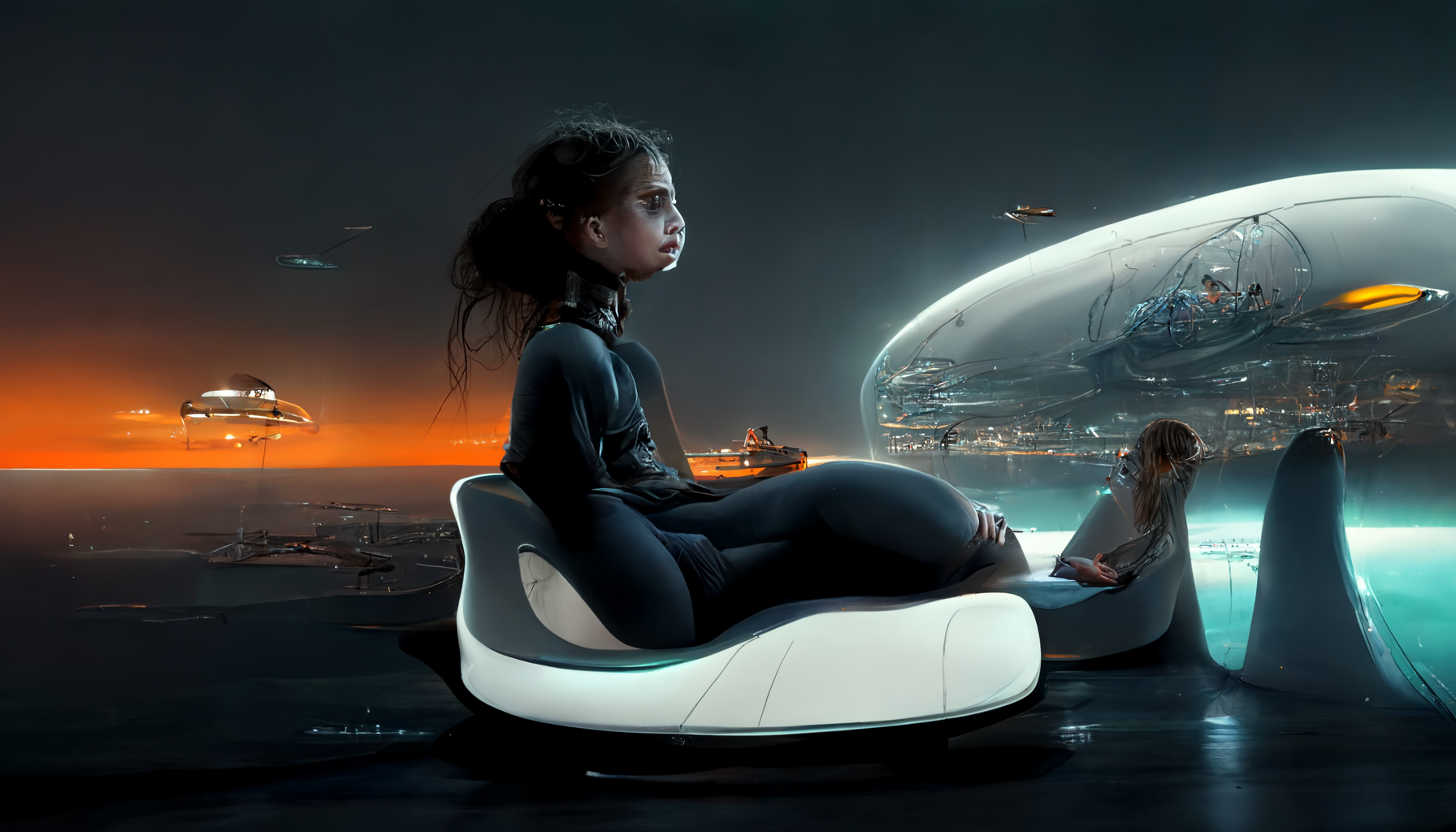 The deck was terraced, so that seats near the back would still have a great view, and their occupants may not have the feeling of vertigo that those closer to the front would encounter. She picked one in the back row, next to an Asian girl who looked about Aisha’s age. The girl was intensely reading a book on her tablet, and didn’t look up as Aisha sat. 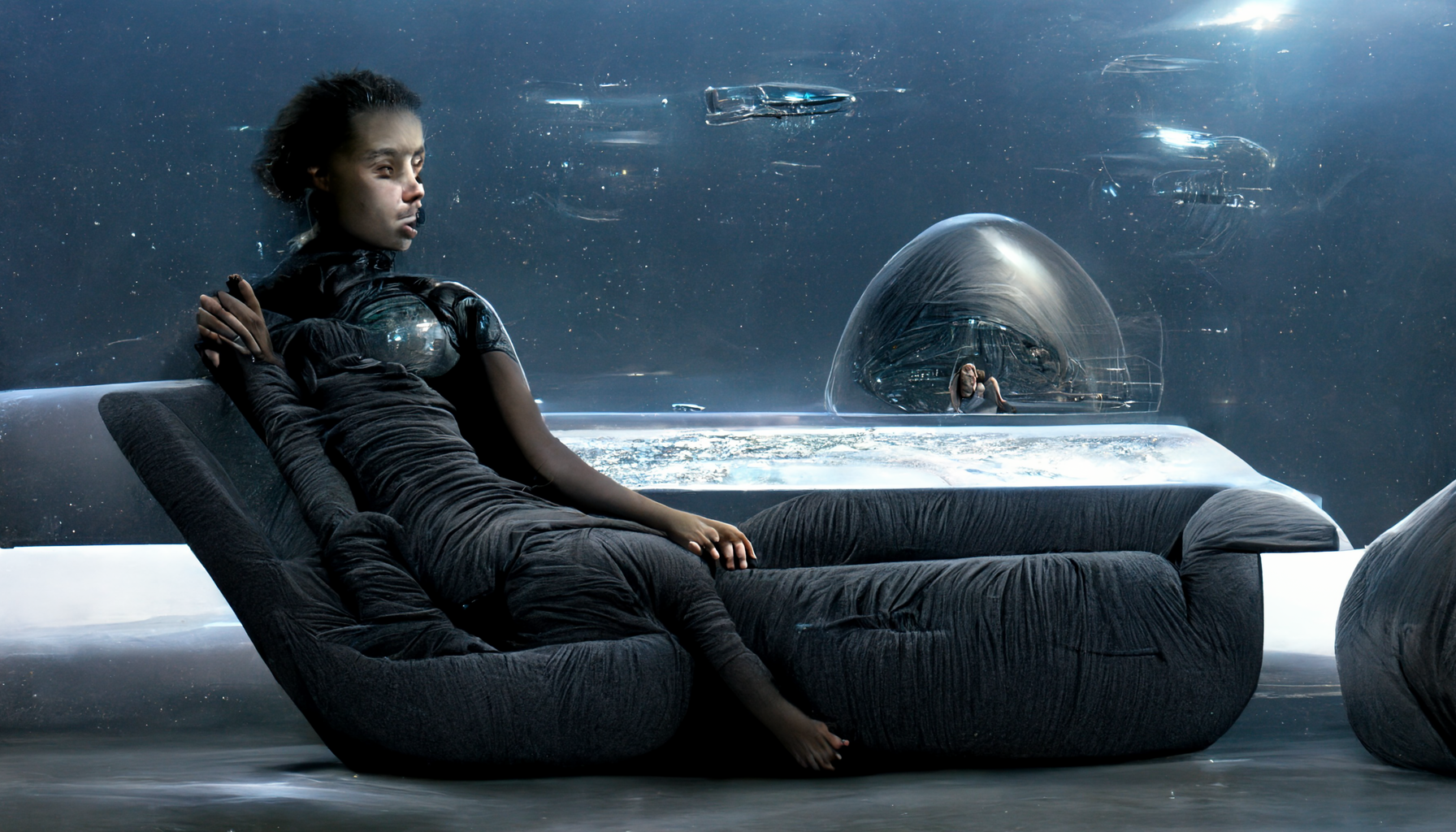 Aisha looked at her. “I’m not sure about that.”

The girl looked up, and her intense eyes searched Aisha’s. “Good to know,” she said finally, reaching a hand out. 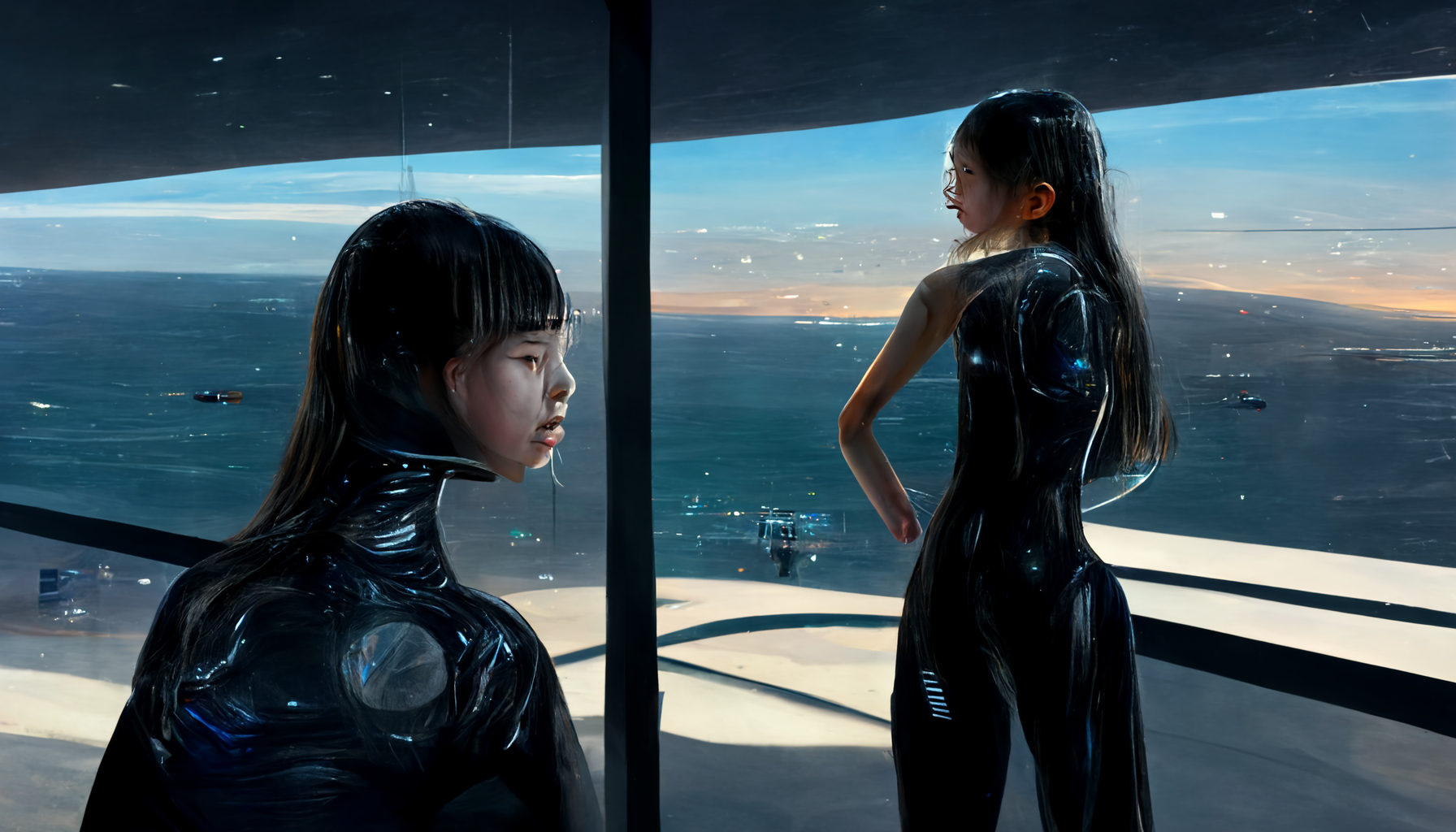 Soo-Kyung smiled. Her plain face lit up when she smiled. She was beautiful.

“So where are you from?”

Soo-Kyung smiled again. “You haven’t heard of me? Good. I guess I am not a celebrity, either.”

Such an odd answer, and from Soo-Kyung’s reaction, it was clear that Aisha’s confusion was written on her face.

“I think we are going to be good friends,” said Soo-Kyung. “I like how you are straightforward. I am too, but that intimidates some people.” 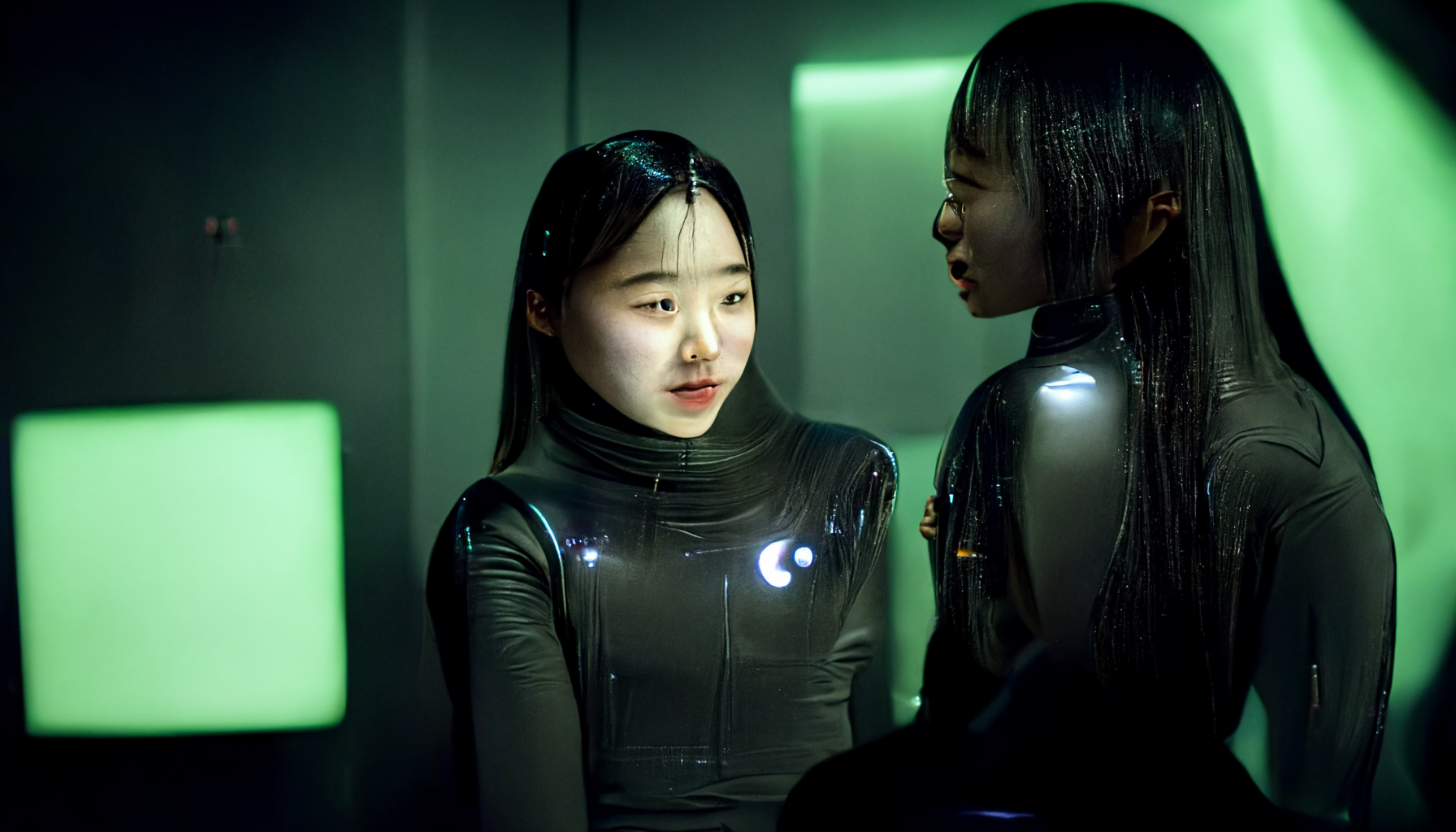 “So where are you from?”

“I am from a small village called Sijungho,” continued Soo Kyung. “There’s not much to see there.”

Aisha felt her insides go cold. Against her will, she shuddered a little, and felt a sob begin to escape from her throat. Her father had died as a result of radiation sickness incurred in the second Korean War. And there was a North Korean girl here with her. Going into space with her.

She knew there was incredulity in her voice, but she couldn’t mask it. “Are you going to the Academy too?”

“That’s what you meant by celebrity?”

“It seems the media made as big a deal about me being the first North Korean as it did about you being the first African-American to go through open enrollment. It’s all a sham though, isn’t it?”

“I’m beginning to gather that.”

“I mean, when the Academy was first built, it was apparent that it was for the Elites, most of whom are from Western society, with a few Russians and Chinese thrown in to get funding. Nobody really knows who the students were, but it was typically those who would be in private elite schools on the surface, so being in space made little difference.”

Aisha thought about what Soo-Kyung was saying, and realized that she was right. Amazing that she had never thought of this herself.

The Korean girl continued. “Now that they are all in place and established, it’s time to open it up to the rest of the world, so we can get their proverbial ‘sloppy seconds’, I guess.”

“The cannon fodder, while they are the officers ordering us around.”

Soo-Kyung shrugged. “Because it’s better than not going through with it. Besides, there might be something great waiting for normal people like us.”

“My father died in Korea,” said Aisha, surprising even herself at the change in subject. “But he always told my mother to tell me that I had a destiny. That the emerging age of space flight was one in which we must be free to explore the universe. He fought so that that freedom would still exist, so that I could do this. I can’t turn back.”

“Most of my family died in the same war,” said Soo-Kyung. “But nothing ever really changed, did it?”

Aisha realized that she must have sounded bitter, and the bitterness was reflected in Soo-Kyung’s answer. “I’m sorry,” she said.

“No need,” said Soo-Kyung. “I’m glad that you are open and honest with me. Most people, particularly outside of my country, are not. They learn about where I’m from and think I need special treatment. I don’t. I’ve learned to stand on my own.”

“I wish I had your strength.”

“You don’t,” said Soo-Kyung, suddenly serious. “That kind of strength comes from trying to make a life in a country destroyed by nuclear war. You never want it.” 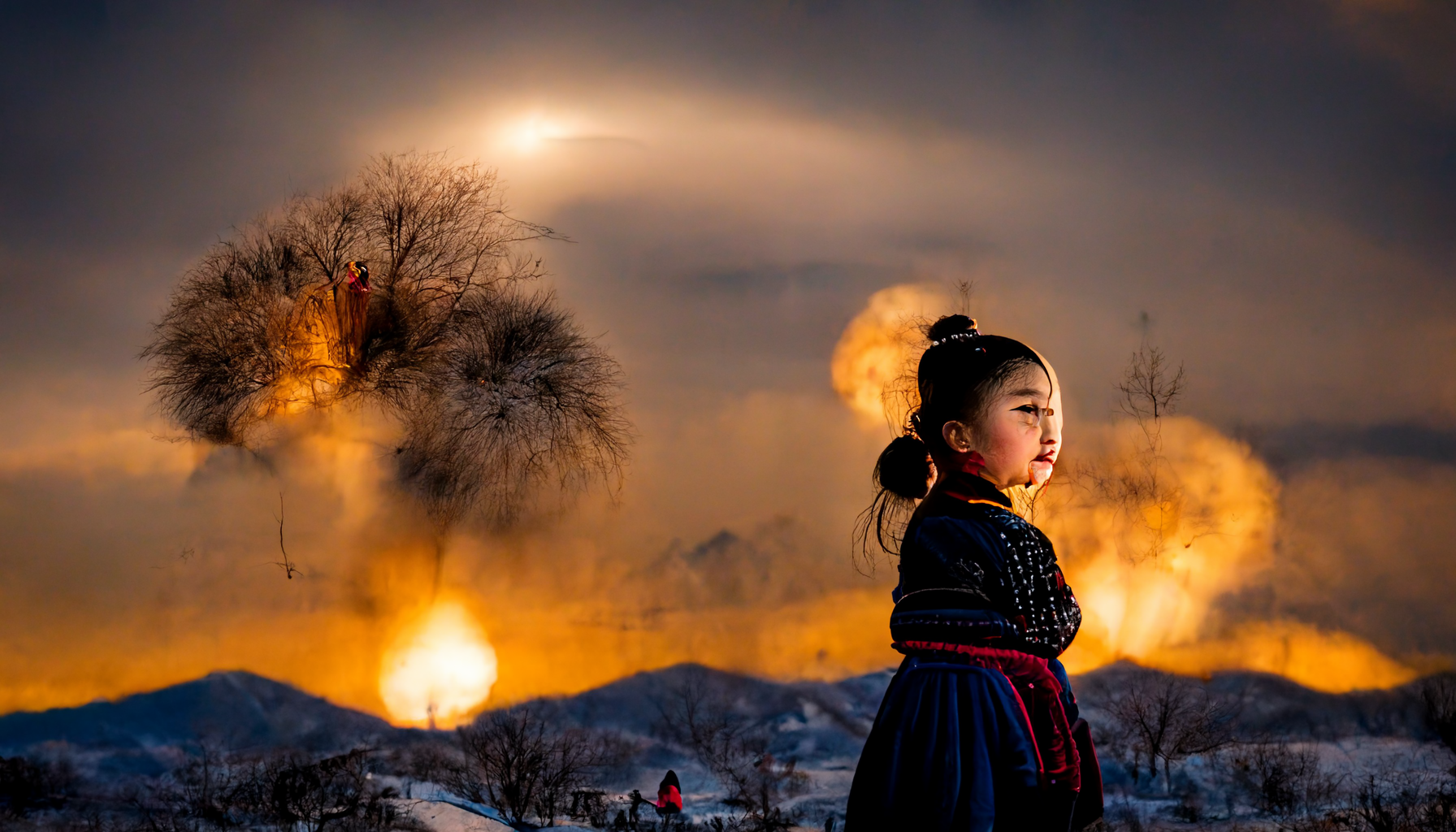 “That’s why we’re going into space, isn’t it? To make sure that wars like those will never put our species’ survival at risk.”

“That would be nice,” said Soo-Kyung. “But if anything I think it will cause more wars and hardship before things get better.”

“Why?” “Because the only thing that stopped the entire world from burning during the war over my country was that it was the only world we have. If we discover more planets, livable ones, that will no longer be the case. And I want to be as far away from this world as possible before the next bombs fall.”

Before Aisha could answer, the soft tone of the launch warning sounded. The rocket boost would be gentler than a typical aircraft take off, but safety protocols required that they be buckled into their crash seats in case anything went wrong.

She rolled her eyes and smiled, and strapped herself in. When everything was snug, she turned to look at Soo-Kyung. Their eyes met again, and Soo-Kyung bowed slightly.

The engines kicked in, and their seats lurched a little. From all around came the muffled sounds of the rockets roaring.

Through the windows, Aisha could see the ground begin to slowly fall away. Within a few seconds the flotilla was no longer visible, and as they began to rise, she could see the entire outline of the nearby Kiritimati, where only yesterday they had landed. It felt like an eternity ago.

She wondered how Mother felt, watching her shuttle rise slowly to the sky. As suddenly as they had begun, the rockets cut out, and there was another slight lurch as the inertia of the ship was stopped. She remembered the video training – this was the scariest part of the trip, where the shuttle, under normal gravity, could fall back to Earth and kill everyone aboard.

But it didn’t, and the force on the Space Elevator started pushing them skyward, with ever-increasing speed. The horizon began to spin also, and as they rose up, she watched the island recede. Before long they were high enough to see that the horizon was curved.

This was it. This was for real. She was headed into space! 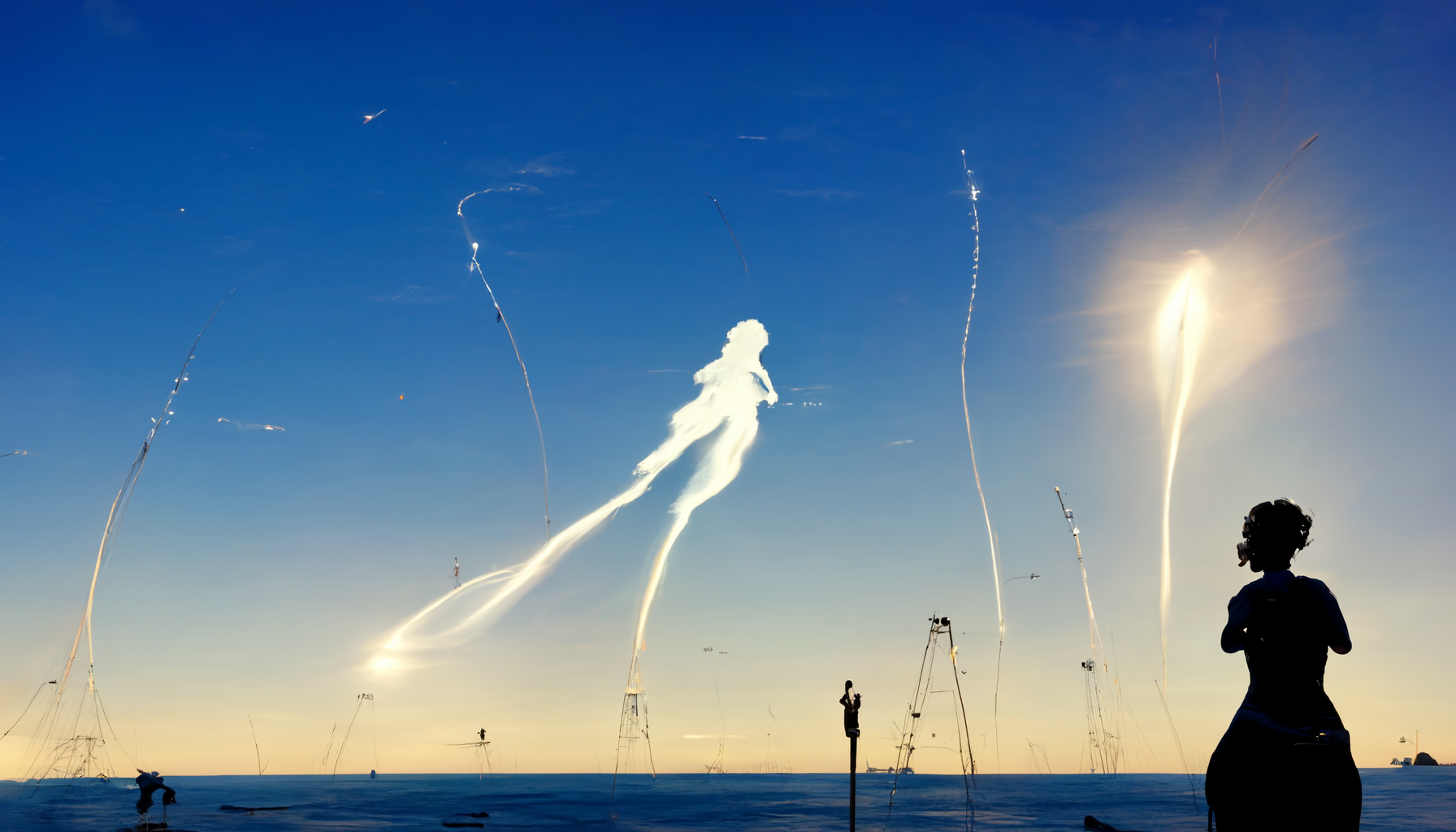